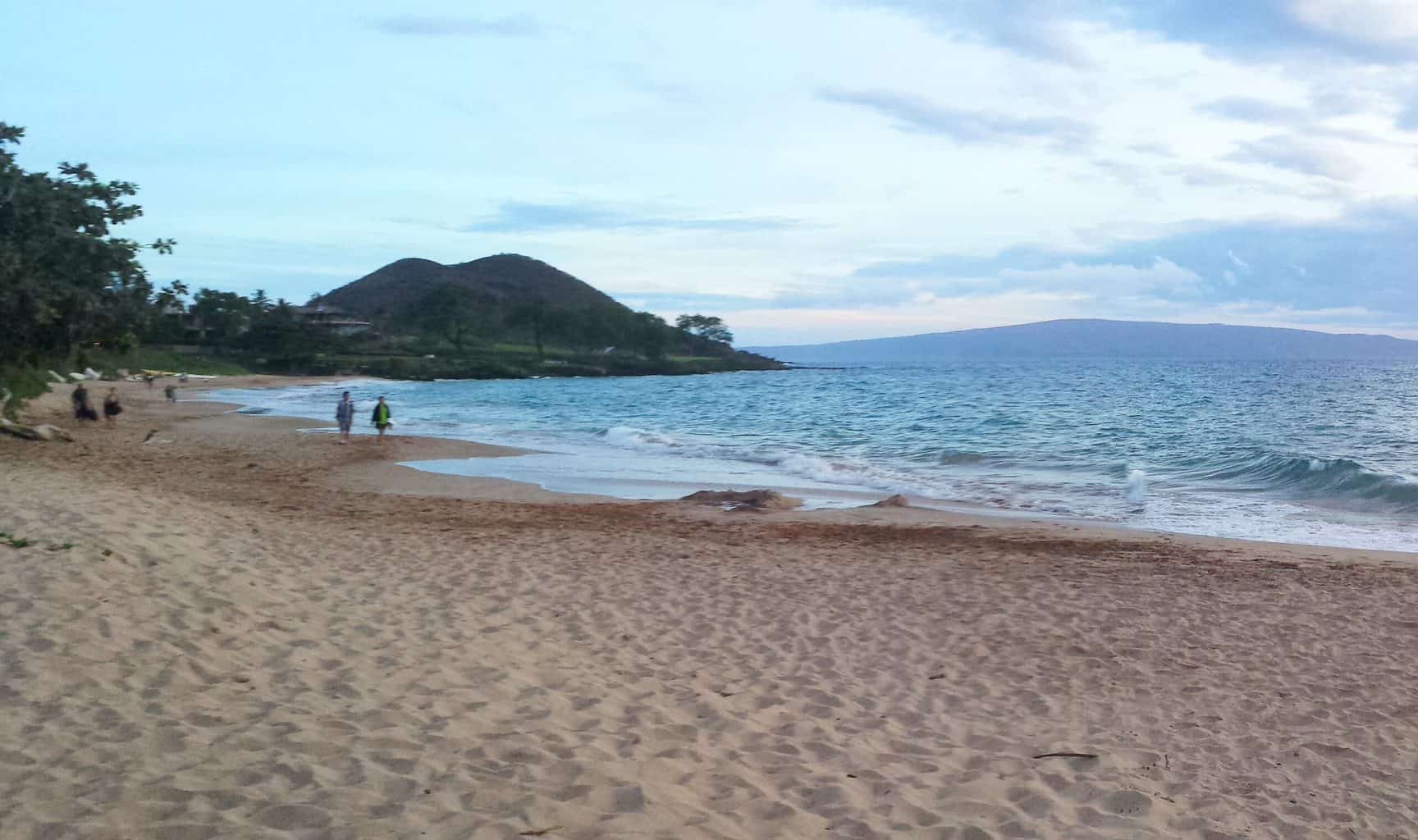 The Maui Planning Commission recently gave the approval and passed the special management area use permit for a $230 Million dollar proposed redevelopment of Makena Beach and Golf Resort.

The owner, ATC Makena’s (comprised of a New York-based real estate investment firm and fund manager AREA Property Partners, Honolulu-based hotel investor and operator Trinity Investments LLC and developer Stanford Carr’s Honolulu-based Stanford Carr Development) intention is to the change the current 310 room hotel into a 76-room hotel with higher daily rates that are more in line with other Wailea Hotel rates (such as the Grand Wailea, Four Season Resort and Andaz to name a few). In addition, they also plan on designing 46 luxury apartment units and 12 condominium units at the 1800-acre resort area. The Maui New reports that Ed Divita (senior development and construction manager of Discovery Land Co., who has partnered with ATC Makena for this project) projects that the residential units will be priced in the range of $1.9-$6 Million. 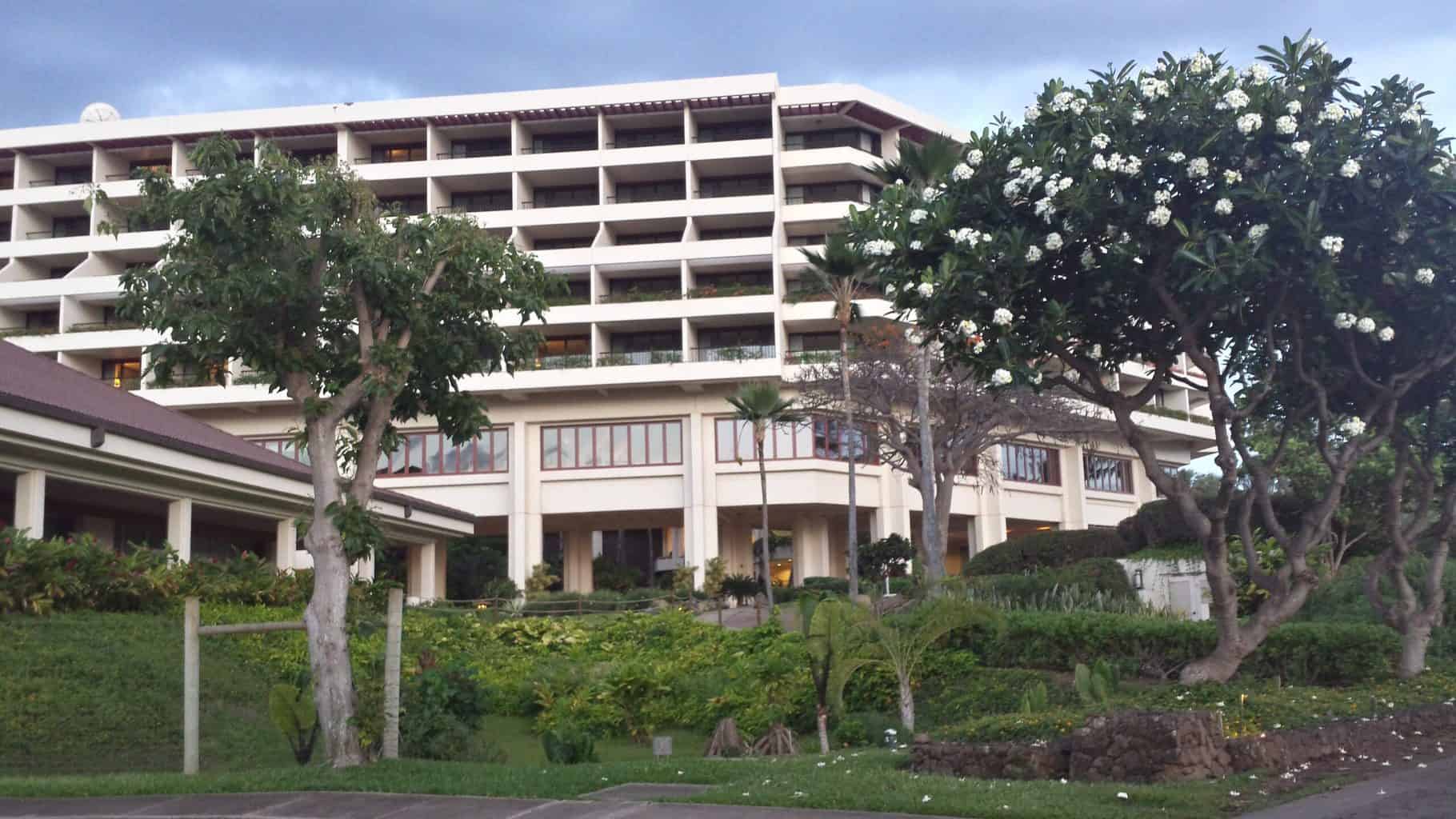 Makena Beach and Golf Resort (formerly the well-loved Maui Prince Hotel) is an 1800-acre property with the hotel overlooking the Pacific Ocean, two 18-hole Robert Trent Jones Jr . championship golf courses, tennis courts, restaurants, and 1300 acres of land with entitlements for residential development. This was purchased  by Maui developer Everett Dowling and Morgan Stanley for $575 million in 2007. The property became a victim of the  economic downtown and defaulted on a $192.5 million dollar loan and went into foreclosure in September 2009.  It sold at a foreclosure auction to the winning bidder who was the lender, Wells Fargo, for $95 Million in July of 2010.

Location and earlier history of Makena:

Located in the pristine south shore of Maui where the sun shines most of the year and averaging only about 7-13 inches of annual rainfall, Makena still remains as part of Maui’s “untamed” side. With long and wide stretches of sand called Big Beach and the latest lava flow area on Maui known as La Perouse, Makena has managed to be relatively untouched by major developers. Makena means in the Hawaiian language the “Land of Abundance and Plenty”. The ancient Hawaiians built their fish ponds and sacred Heiaus here.

Over a hundred Hawaiian families called Makena home from the earliest days on record until the mid-1920s. Signs of their culture, ancient fish ponds and ruins of old temples—can still be found. One could take some great hikes and explore some sites.

Captain James Cook landed (by chance?) upon the Sandwich Isles  ( named for the Earl of Sandwich).  Giving way to Western colonialism, Makena became a thriving seaport, second only to Lahaina which is on the west side of the island. Lahaina was a whaling village at that time.  Root vegetables and other produce, grown in Maui’s fertile valleys, were loaded onto cargo ships headed for the shores of California.

By the late 1850’s a retired sea captain, James Makee, bought a sugar plantation on slopes of Haleakala. When Makee passed away, a severe drought forced the closing of the mill and plantation (it had been ranked 3rd in tonnage among the ten mills in Hawaii by 1866). Makee’s ranch called, Rose Ranch then got sold to the Dowsetts family in 1886 who renamed it Ulupalakua Ranch. The Dowsetts then turned it into a cattle ranch. Upcountry ranchers brought their animals down to Makena Landing to be shipped off . Makena landing was busier than ever. 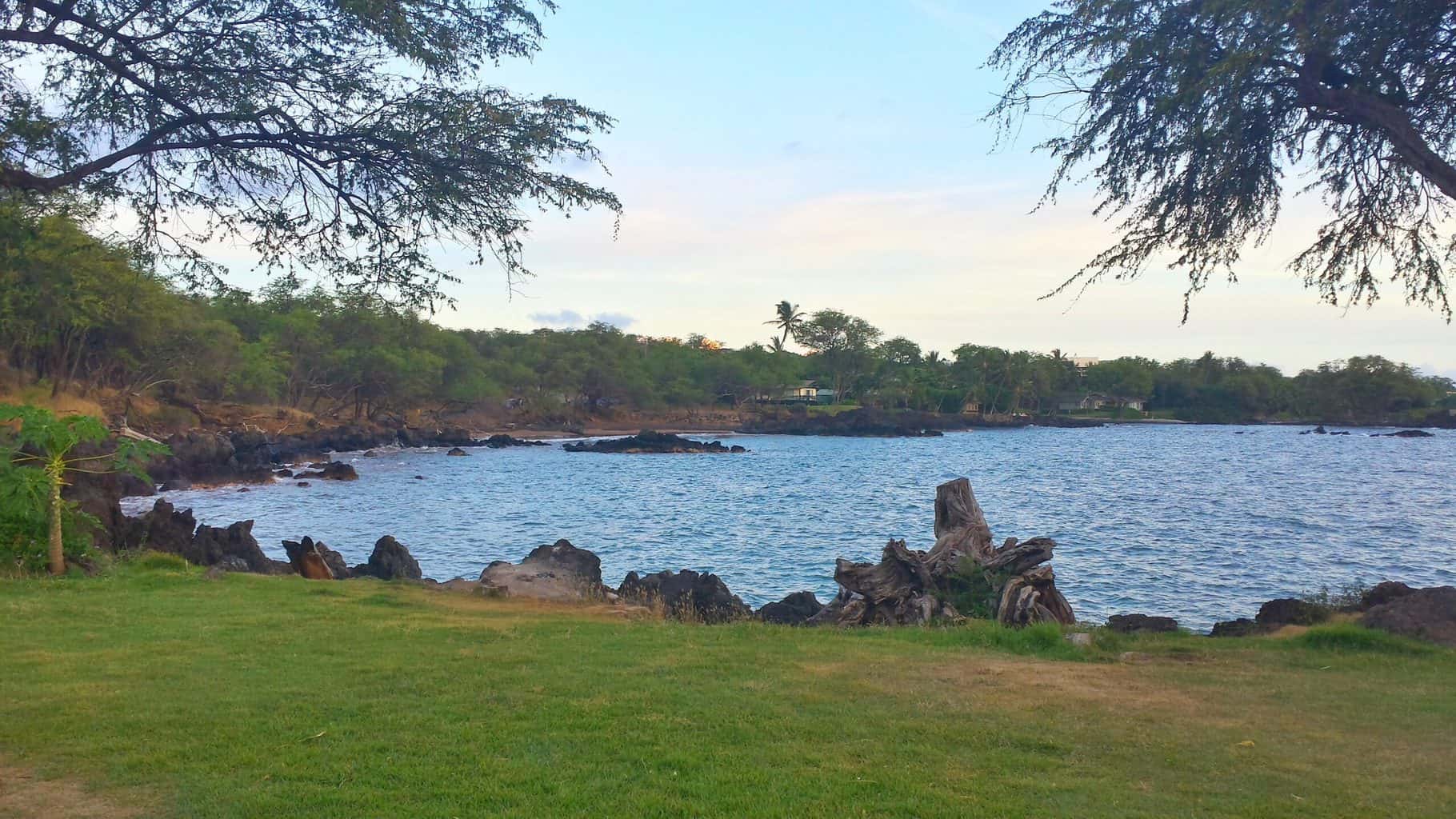 In 1832, missionaries founded a ministry at Makena and, in 1855, built Keawala’i. Keawala’i means, “the calm bay.” Today it is still running as an active congregation and the church is a historic site. It is also one of the most beloved places to have your wedding vows. My cousin got married here in the early 2000’s, and I can personally attest to why this is such a magical and sacred place. 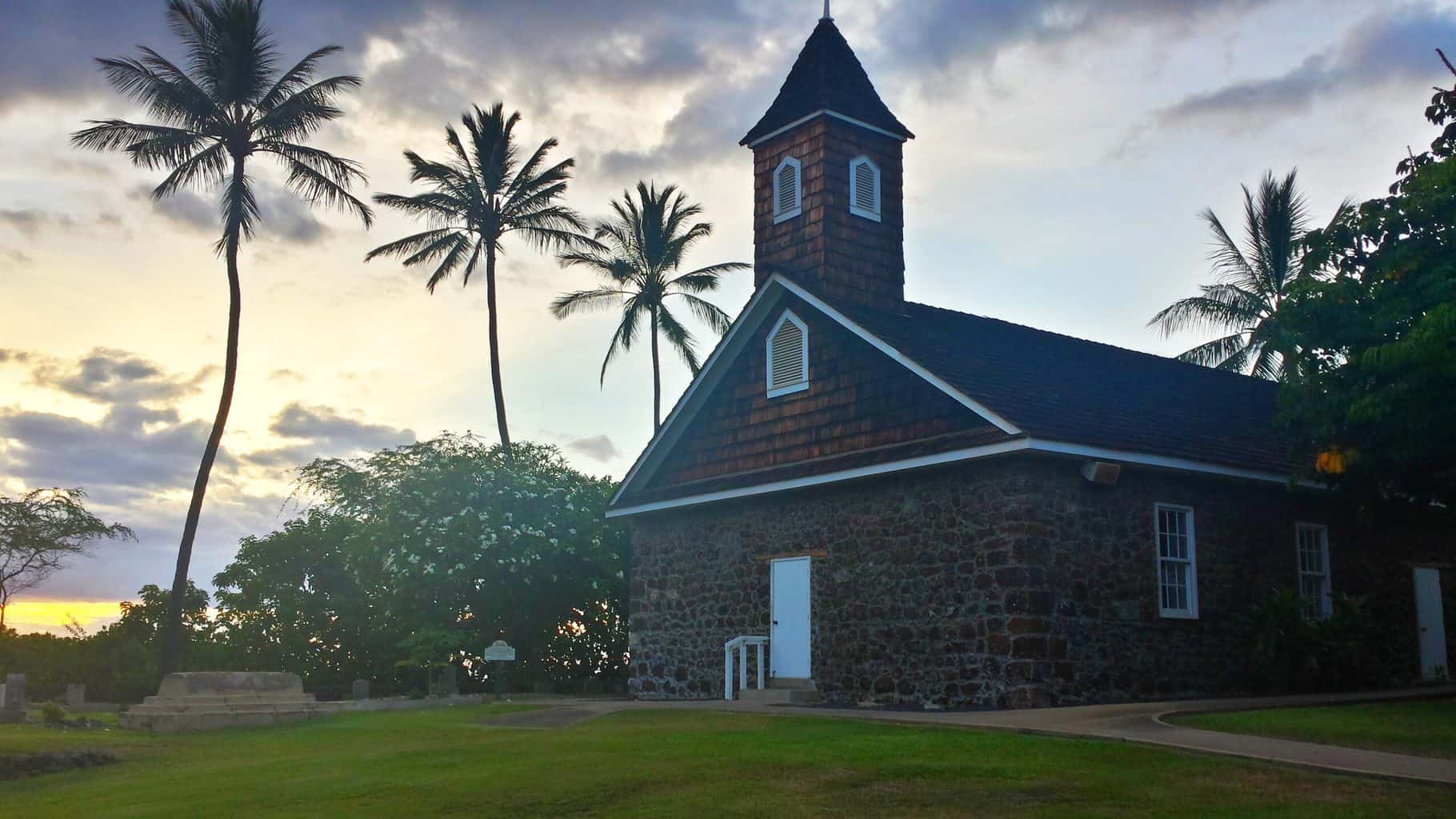 Keawala’i Church on the shore in Makena, Maui

During World War II, the U.S. Army used Makena for training due to its strategic location. They built barracks, bunkers and the shoreline road. During this time Makena Landing was no longer an active trading port. After the war, some of the residents came back for its beauty and abundant fishing reefs. It still however remained quiet and secluded.

Statehood was then approved in 1959. At that time the major industry emerging was tourism.  Quietly the word about Maui’s seclusion and beauty was spreading. Nothing like Waikiku, of course! By the late 1970’s Maui gained international development attention from a Japan based company, Seibu Hawaii Inc. They bought the 1800 acre parcel from the beachfront parcel in front of a fantastic crescent shaped Maluaka beach to the gentle slopes of Haleakala.

In the autumn of 1983 Seibu Hawaii Inc. broke ground on a six story hotel and resort called the Maui Prince Hotel. It was designed by Anbe, Aruga, and Ishizu Architects, Inc. of Honolulu in an “A” shape to allow for ocean views with private lanais. It opened on August 1, 1986 to much acclaim. The Sunday brunch was famous! Then in 1993 they continued the resort expansion with five more restaurants, a Tennis Club and another Robert Trent Jones golf course.  What was then left of the original 1800 acres was about 1300 acres of undeveloped land. It remained in its natural state.  Axis deer, wild pigs, and native birds that live among the large kiawe and native wili wili trees and other native scrub brush were its inhabitants.

For nearly two decades, the Maui Prince performed successfully, and in 2007, the resort was acquired by US investors for $575 million (Maui developer Everett Dowling and Morgan Stanley), the largest price ever paid for a Maui hotel. Then, as the Great Recession hit the US, the hotel was nearly forced into foreclosure by September 2009. It was saved at the 11th hour by a court-appointed receiver, and lien holders stepped in to cover expenses. The hotel was renamed the Makena Beach & Golf Resort.

The 1800-acre resort was subsequently sold at a foreclosure auction for $95 million in July 2010 to a group of US investors led by AREA Property Partners, Trinity Investments, LLC, and Stanford Carr Development, LLC. Landmark Hotels Group, Inc. was appointed as the new operator and management company.

Information on one of new owners, AREA:

Go directly to their website www. areaproeprtypartners.com for more information about AREA. Below is an excerpt taken directly from their website.

AREA, an investor in the lending trust, worked with the lender from the start of foreclosure to ensure that the hotel stayed open and guests continued to enjoy the resort experience, and was designated to assume ownership by the lender. “Over the last year, many parties including the receiver, the lending trust and its agents and the hotel management company made extraordinary efforts to stabilize the hotel operations and position it for a transition to long-term ownership,” said Bradford Wildauer, AREA partner.  “In assuming ownership of the property, AREA and our partners are expanding our commitment to the resort, its employees and guests.  We plan to revitalize Makena so that it continues to be a premier destination resort.”  The property will continue to operate as Makena Beach and Golf Resort.AREA and Trinity have a successful track record of joint investment in luxury resort properties in Hawaii, including current ownership of the Kahala Hotel and Resort on Oahu and previous ownership of the Fairmont Kea Lani Resort and Embassy Suites Kaanapali, both on Maui.About AREA Property PartnersAREA Property Partners, formerly known as Apollo Real Estate Advisors, is a leading international real estate investor and fund manager on behalf of prominent government and corporate pension funds, sovereign wealth funds, insurance companies, foundations, endowments, and high net worth individuals.  Since the firm’s founding in 1993, AREA Property Partners has overseen the establishment of multiple real estate funds and joint ventures totaling $13 billion in equity commitments for investments in the United States and globally.  Its funds have collectively invested in over 515 transactions with an aggregated value in excess of $60 billion. The firm has offices in New York, Atlanta, Los Angeles, London, Paris, Luxembourg and Mumbai.  The firm’s Web site is www.areapropertypartners.com

The future remains to be seen. My hope is that Makena will somehow maintain its untamed and pristine side even though its redevelopment appears imminent. Finding the right balance with respect to the culture will be key.

Mahalo for reading. Please call or email us for updates on Makena, Maui Real Estate.

The Living On Maui Team

P.S. Right next to Makena Beach and Golf Resort and across from Maluaka Beach is the newest development being offered for sale called Makena Sunset. 4 luxury condos with pools and great ocean views. Call or email us for more information. Here is the construction status as of June 5, 2014, see picture below that I took before sunset. 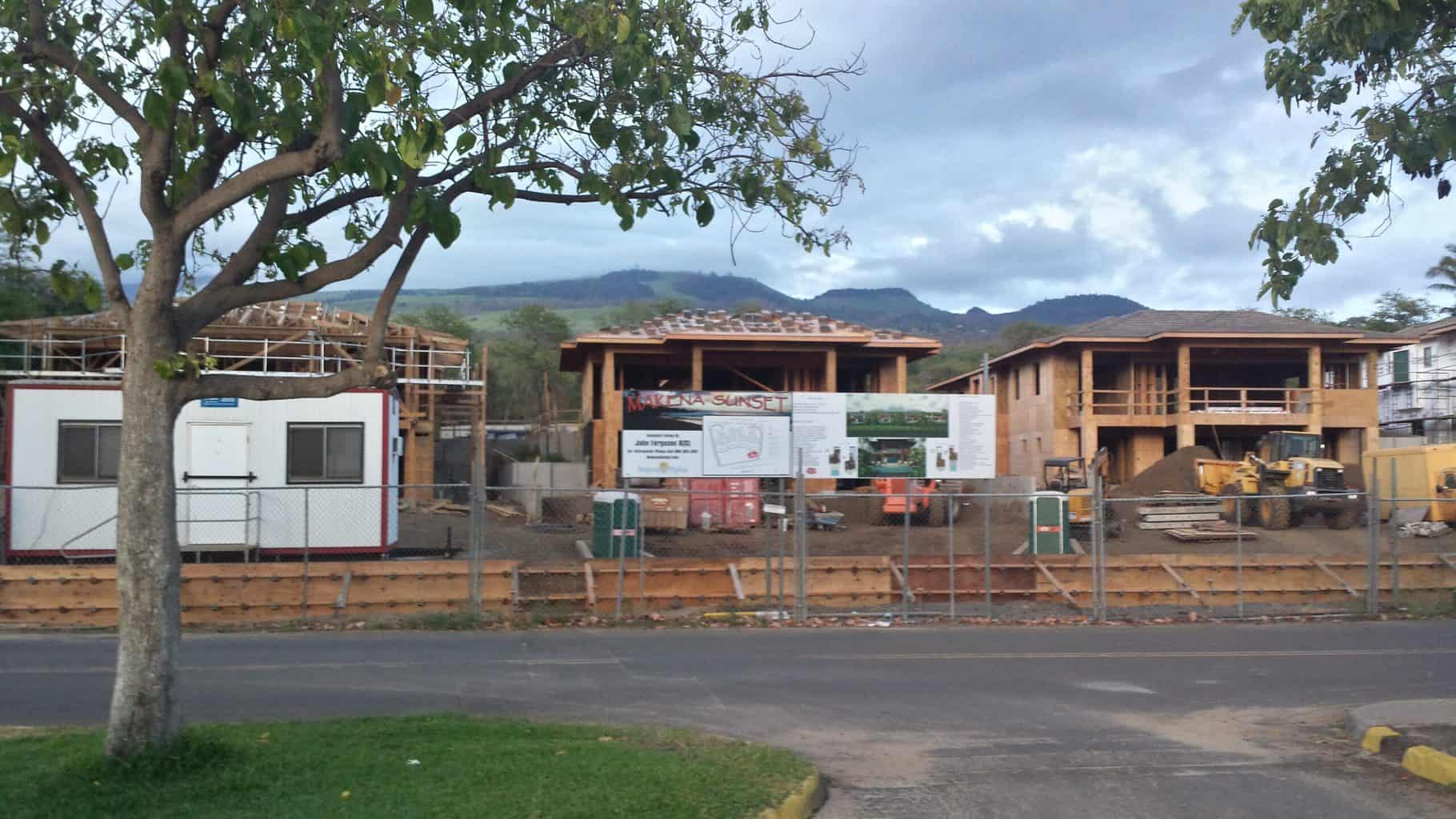 Makena Sunset as of June 5, 2014. Luxury Condos offered. Call or email us today for more details!

All pictures have been taken by Jeannie Kong. 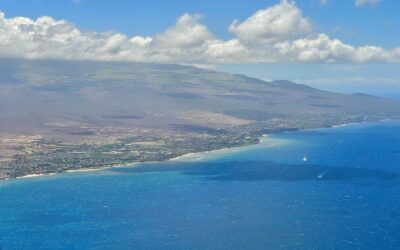 Maui Had Fewer Visitors, but they spent more! Hotel occupancy up!

Maui Had Fewer Visitors, but they spent more! Maui Hotels lead, and occupancy up! According to the State of Hawaii... 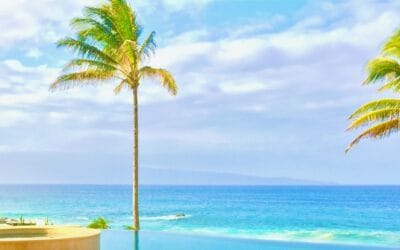 Want to Sell Your Vacation Home?

Why This Is a Great Year to Sell Your Vacation Home Sunset on Keawakapu Beach, Maui, Hawaii As vaccines are... 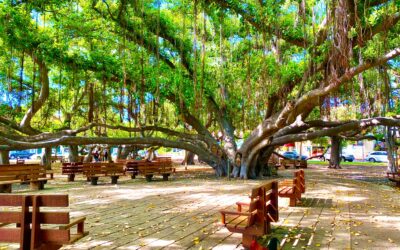